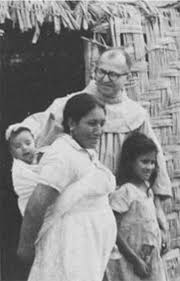 Today, as we remember the 33rd anniversary of the passing of Father Eusebe H. Menard to the “House of our Heavenly Father,” I wish to allow you discover the ‘man-priest’ who was our beloved founder, and let this little reflection seek to be an instrument that motivates us in our vocational work.

Speaking of the ‘man-priest’ Father Eusebe Henry Menard, O.F.M. it leads us to explore from the perception of us, his sons, those of the first and second hour, and the heritage which he left for the new members of the ‘family of the Holy Apostles’ who did not know him.

First, we discover that he was a very controversial man. Some canonize him, others criticize and condemn him, but he left no one indifferent. This already tells us that he was an authentic priestly vocation, in the manner of the Gospel; God calls those who are not special in the eyes of the world.

He came from a simple, hard-working Catholic family. The sixth child of a family of eleven, two women and nine men. It is there that he learned the basics of his faith, which will later be very useful in his foundations . At a very young age, he began his foundations: of both men and women, which are now spread over ten countries. The mission of his foundations: "To give holy priests for the Church.

From his foundations, his sons are going to give an image of Father Menard!

For some he was a saint, always loving those who were in trouble, especially priests who needed help, he took them to live in the houses of the ‘family of the Holy Apostles, even though sometimes some of these would be the same ones who would pay for it with accusations and betrayals. But in Father Menard there would only be forgiveness and understanding, he would say, "I will kneel down and kiss the hands that accuse me".

For others -- a sinner; they will say ugly things against him, he is judged negatively, he mixes with sinners, and thieves, and lazy, in short, the abandoned of the world. All is true, but our father would see in them the same Jesus.

For others -- a father who loves them unconditionally, who accompanies them on their vocational journey, who sacrifices himself to give them a roof and a house in which to be formed, who takes them to the hospital if they are sick, who tolerates them if they do not give up academically, who wants them to be the missionaries of our time.

For others -- a dictator, one who does not tolerate mistakes, demands where he has not sown, makes them work too much, does not understand them, always seeks to make them perfect, does not allow them to do what they dream. But they forget that he is a young priest, without help, he must do everything himself; therefore, he opens to the laity, the hand that holds his, to continue to give priests to the world. But also, the father needed to become mature as a human being and be more tolerant, which he will do when he is older; his children will see in him a grandfather who loves them dearly.

For others -- a friend of sinners, his very limited free time, he dedicated it to seek them, to listen to them, to show them that there is another way for them, a way of redemption; he told them "I do not judge you; Jesus has also died for you". And how many hearts he was able to make return to the path of good; how many thieves and homeless came to live with his seminarians, and they learned to look for the lost sheep.

For others, he was too generous, trusted too much in human beings, who abused his generosity, literally robbed him, but this did not worry our father, he was concerned about their salvation, and said that little by little they are going to learn that God loves them beyond their defects, because they have the ability to steal heaven -- they will precede us, he repeated.

For others -- a friend of abandoned children who he would look for them on the streets of Lima. What negative judgment and incomprehension came from his spiritual children. To the children abandoned he spoke of the ‘Kingdom of Heaven’, blessed them, fed them, bought grilled chicken for everyone, made them have a wonderful day, even if it was only once a month; and when the children saw him they would say "our father, the crazy gringo." It was true; he was a father crazy with love for their salvation.

For the destitute, especially the sick, he was a merciful father; he listened to them, healed their wounds, he brought them food, especially for those who had leprosy; and for the abandoned and dying he created a home for them, "St. Peter's Home," where he asked his seminarians to wash their wounds, to heal their hearts: only then would they understand how much God loved us.

For those who knew him as seminarians, he was a model to follow, always asking us to persevere. There is much to do to save our brothers, to bring the Eucharist, to preach the Gospel, to reconcile them with God; “you are called because God counts on you,” he repeated.

A great preacher, his masses were a celebration full of the presence of the Holy Spirit, full of praise and fire, we left transformed, ready to conquer the world, what a great man of faith and hope.

But no one was indifferent to this person!

This ‘apostle of late vocations’ loved to form priests. He understood the mystery of the priestly vocation. "It is Jesus who calls, he does not look at your perfections, but looks at your heart," he repeated. He recommended not losing hope; if the formation of a priestly vocation took even more than fifty years, we should not worry, because everything had meaning when he celebrated, even if it was only one Mass in his life, we would have fulfilled our mission.

For all this, he reminded us that we must form very well the vocations that God sends us, because they will always be under the critical eye of negative people. If they are not well formed, they will criticize everything, from food to companions, and finally the worst criticism will be made against their superiors, considering them the worst of all. We should not only focus on people's defects, but we should learn to see their qualities, "learn to love your neighbor completely, with all their defects, just as you love yourself with all your defects." This he repeated to us in his ‘Letter to Priests’ on November 16, 1981.

“Every morning you have to meet the Lord, to live the whole day in the darkness of faith. To meet others, first learn to open your eyes. Learn to love others until you yourself disappear, that is the secret of your vocation,” he repeated to us.
What about our founder, was he a saint of our times?
Thank you very much, Father Eusebe H. Menard, for what you were, for what you left behind, and for the mission you entrusted to us.
Together in the Lord Jesus,