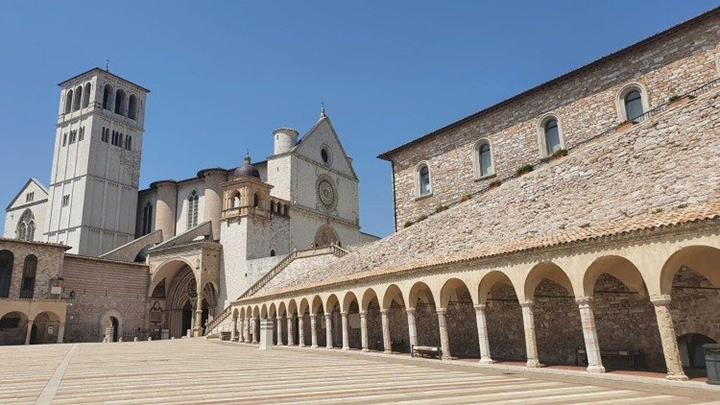 To underline the significance of Pope Francis' trip to Assisi, Mons. Paolo Martinelli, Auxiliary Bishop of Milan and member of the Franciscan Family, returned to the meaning of the place where St. Francis gave birth to an experience of spiritual life, whose fundamental heart was precisely the recognition of being brothers to one another.

The Jesuit Father Luigi Territo, for his part, explains the value of an actively "outgoing" Church, as the Pope likes to repeat: "It seems that he is telling the world that there is a mystical and spiritual priority of the experience of faith over all the institutional forms of our beliefs. Assisi represents all this, and not only for Christians, where there is the historical memory of a Saint who lived as the little ones of the Gospel, totally entrusted to the Father and for this reason recognized as a brother of all".

A Magisterium imbued with fraternity

Looking at the encyclicals of Pope Francis, one can easily find the seeds that were somehow sown to prepare the ground for this encyclical Fratelli tutti. "One thinks of the text of Evangelii gaudium where it is a question in certain passages of a mysticism of living together, of mingling, meeting, hugging, bending over and bringing a relationship of fraternity to all people," Bishop Martinelli recalls. I see a deep connection, at least if we consider the title, with this fundamental and programmatic text of his pontificate". The Prelate emphasizes the idea of being united to one another for the mysterious recognition of the presence of God in each one of us. A mysticism that knows how to perceive God in fraternal relationships.

But in this new encyclical, there is also Christus Vivit, the apostolic exhortation addressed to young people after the synod dedicated to them, the appreciation of the style of openness to all, of attention to the concrete human being of each one, of sincerity, courage, mutual trust: the foundations of a powerful sense of fraternity. "Here, the quotation of Francis of Assisi is appropriate," notes Bishop Martinelli, "when he wrote his will, he wrote: 'The Lord has given me brothers'".

Father Territo shares the reference to Evangelii gaudium where the Pope speaks of a Church that knows how to take the first step that knows how to take the initiative without fear that goes in search of the distant, that is at the crossroads. "It is not so much the question of reciprocal fraternity," the Jesuit says, "as the concept of a Church that does not wait, that throws itself toward its brothers, that marks a path. In this sense, the Church for the Pope is precisely the leaven of fraternity. I see it also in Amoris Laetitia or in Laudato Si': there is the idea of accompanying all humanity, of conjugal love, of wounded couples, of accompanying the excluded, of concern for the wounds of the earth. In short, the idea of a Church that takes care of all humanity".

Is it a feeling, a value, a disposition of spirit, a commandment, a way of life, a gift? "From the Christian point of view, fraternity is above all a responsibility," Father Territo explains again, in the strong sense of the term. It is a decisive and conscious response to a way of life that Jesus has shown us. A face of God that Jesus showed, fraternal, welcoming, open, non-judgmental, and also, if you like, a response to the original call of Genesis: "What have you done with your brother? It is no coincidence that the Abu Dhabi document also begins with "In the name of God. Not in the name of social coexistence, peace, solidarity. But in the name of God. In the Christian sense of the term, it is therefore a response to a call to fraternity".

Bishop Martinelli takes up one of the fundamental intuitions of Laudato Si' in which he repeats that everything is linked: "From the vital point of view of the structure of what exists, everything calls us to grasp each other in relation. The experience of St. Francis of Assisi, who lived a profound familiarity with everything and everyone, is emblematic. Even with the death of his sister. In the Christian sense of the term, we recognize that what Christ comes to reveal to us is the mystery of the Father, who takes us one by one, original, unique and irreplaceable. This allows us to begin anew always, in all relationships".

The path of universal brotherhood is not without difficulties and risks, because the enemy is always on the lookout. There are forms of incomprehension of fraternity that are bad ways of thinking about communitarianism, forms of pseudo-fraternity that select and distinguish humanity into different classes, that reject, that exclude in the name of a national, ethnic, religious fraternity," the Auxiliary Bishop of Milan emphasizes again. According to him, if the fraternity excludes, it means that there is already the germ of the disease. "It is therefore necessary to educate oneself to recognize the good of the other as an inexhaustible richness", overcoming prejudices and fears.

Religious leaders and the wait for the encyclical

Religions are sometimes manipulated. "Can this encyclical seal the vocation to build a peaceful coexistence, a vocation proper to each religion? I believe that the Pope is following a path, there is a continuous process of dialogue and bridge-building, as he likes to say," Father Territo explained, referring to the Abu Dhabi Document, which affirms that "there is no alternative in the world in which we live.

"I believe that "Fratelli tutti" will continue in this process which is made, yes, of a magisterium of writings, but it is also made of a magisterium of gestures of fraternity. I believe that the religious leaders await this encyclical with curiosity, interest and hope, knowing that the Pope proposes a common path," said the Jesuit. "We are a bit like the children of a time when the relationship between civil society and religion has been problematic," Bishop Martinelli concluded. "It's not just to get along, as if we all have to put our religious experience on hold. This is not possible, because it is precisely in the recognition of religious experience and mutual esteem that we can be enriched".