Begin the presentation with the objective that guides us to the formation in the IPT: "... to lead the probationers to make a firm commitment to dedicate himself to the apostolic life according to the charism and mission of the Society, this is to PROMOTE, FORM AND ACCOMPANY A YOUNG PEOPLE AND ADULTS IN THEIR VOCATION TO THE PRESBITERAL MINISTRY AND TO THE OTHER MINISTRIES IN THE CHURCH, living the spirituality and lifestyle that characterize it. »To reach the goals, the formation team is committed to being pastors among the participants and accompanying in the Vocational discernment being integral, gradual and continuous.

- The project of the ITP, desired by Father Menard and announced in the General Directorate of Formation (1997), became known in the General Assembly 2012. Then the General Animator and his Council continued with Planning, looking for the formation team, looking at the way of financing and choosing as host some environments in the Villa La Paz Retreat Center used by Probation Time for Latin America (TPAL). We also remember that this house was the first Seminary of the Holy Apostles in Peru, it is the place where our beloved P. Menard lived for more than 19 years, he said, that this house is the "cradle of the MSA in America Latin "and is" ... like the Holy Land in Palestine ". That is why living the experience of the ITP in this house is where we breathe and are refreshed in the footprints of our founder, who fills us with the strength of God and the MSA spirit.

As the Probationary Time, it is the heart of the spiritual formation and "the most important year" (P. Menard), since the beginning of the execution of the project in the year 2014 to date, the members of the Delegation of Peru have strongly supported the cultural immersion stage, welcoming the participants in local communities and apostolic works. We have had a permanent relationship during these years with the Animator of the Delegation, who as Legal Representative of the Congregation of Missionaries of the Holy Apostles is the legal responsible of each foreign candidate. In addition, the General Animator placed under the responsibility of the Animator of the Delegation and its Council, the candidates in the “time of insertion.”

We work in a subsidiary team, directing one or more dimensions of formation (human, community, spiritual, intellectual and pastoral-missionary), as well as in the integral accompaniment to the probationers distributed in intercultural communities of life. The formators are guided by the documents approved by the General Animator and his Council, which are the Board of the ITP and the Statutes of the ITP. We also have the Internal Regulations and the Program that we update annually.

As cross-cultural MSA trainers, we will need to form and share with those working in this field.

In 6 years, we have had a total of 52 candidates from three continents (America, Africa and Asia) and ten countries (14 Vietnamese, 14 Congolese, 8 Indonesians, 7 Colombians, 2 Cameroonians, 2 Peruvians, 2 US, 1 Haitian and 1 Brazilian and 1 Canadian).

According to the dependence of the local communities, the delegations and the provinces, we have:

14 of the local community 'Saint Matthew Apostle' of the DR Congo,

14 of the Local Community 'Word of God' of Vietnam

08 of the local community of Indonesia,

07 of the Delegation 'Dr. Carlos Jaramillo of the Torre 'of Colombia,

04 of the Delegation of Peru,

01 from the Province of Canada,

02 of the Delegation of Africa, and

- The Statute indicates that the probation period starts on March 26 and ends on December 26. The first stage is cultural immersion, where we have distributed to the candidates in the various local communities and apostolic works, to share among the members and graduates of Peru the fraternal life in community. From the arrival to Peru, they enter the concrete formation of interculturality. The understanding of Spanish has led us to see the timing of the official start for each group, taking into account that candidates are formed between the nine and eighteen months stipulated in the Constitutions. Normally then the “time of rupture” follows, where we live the month-long retreat of Fr. Eusebio Menard; We continue with the “deepening time” in which the bases for the MSA identity are given; And ends with the “time of apostolate,” where we experience the vocational synthesis according to MSA own lifestyle. In the intercultural formation, we are taking progressive steps from the “stage of cultural immersion,” through the time of rupture (retreat of month), continuing the “time of deepening “and ending with the “time of apostolate.” We also work on intercultural formation in the human, community, spiritual, intellectual and pastoral-missionary dimension, which are present in each of the stages. 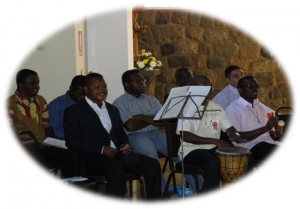 It is important to induction basic enculturation in the country of origin, deepening the life of some aspects of the new host culture (Peru), and the culture of the probes of the countries with whom it will share. This basic training will encourage intercultural opening during coexistence in the ITP. I share some aspects that we live in the formative dimensions, where the candidate, future member of the MSA family, is progressively working towards the acquisition of an intercultural competence:

- We are alike forming in an attitude of full appreciation of the brother with different skin color (black, yellow and white), leaving the prejudices and possible traits of racism. This implies deepening the respectful, tolerant, patient, humble, dialogue, adaptive, spirit of initiative, emotional and affective stability. In addition to having a critical conscience to change the anti-values ​​of one's own culture and of others, which do not agree with the culture of the Gospel. As formators, we practice personal and community fraternal correction with kindness and we confront with firmness. 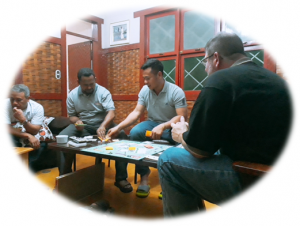 - The general educational community is organized by Communities of Life (CV), which assume responsibility in an intercalated way in the attention of the kitchen-dining room and the liturgy. We held meetings with the CV coordinators, among the members of the CV, and with the entire educational community. 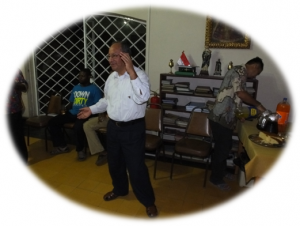 We change responsibilities and rooms every two months. With freedom, we prepare our own food (fufu-Congo, yellow rice-Indonesia, chicken with lemon grass, salad of sweet potatoes-Vietnam), in the fraternal meetings we share the music and dances of the country, we naturally use our own clothes, we value these aspects, however if we stay there we are at the tip of the cultural iceberg, the challenge is to leave itself, to leave the ethnocentrism, to go to meet the other little by little advancing in depth. Some have managed to interrelate more quickly, others slowly. We are making way for intercultural formation, in reciprocity, the creation of relationships, mutual exchange and enrichment. By interrelating, discrepancies arise. Sometimes peaceful coexistence was injured, in manual labor, in sport, by a word, by a gesture, by reactions according to personal character. There is a tendency to be among the linguistic group, speaking the language itself. The difficulties of interrelation that are emerging is an invitation to the trainers to meet the test and develop the art of confrontation in the accompaniment. We insist that the golden rule of the Gospel is lived in community life: to treat others as we want to be treated!

- As a host country, we recognize the diversity of ecclesiology and experiences; we express this in the liturgy, giving space in the songs to the different languages, in the case of Africa the gestures and the dance Of the Congo (approved by the Holy See). 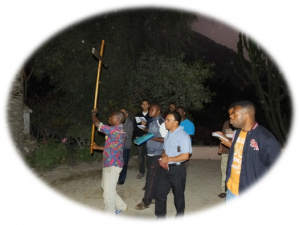 Weekly we celebrate the Eucharist with the texts in different languages: French, Lingala and Portuguese. Participating in the spiritual and liturgical riches have brought us closer. Being oriented to live the culture of the Gospel, is making the internal culture of the country, the culture of the country, the three continental mentalities (African, Asian and American), guide us to have the same feelings of Jesus, our only model. At the end of each month, from Thursday to Saturday, we have the encounter with the Father (reconciliation), with the Word and with the brothers. We form in the renewal of the personal encounter with Jesus and the continuous path of conversion from the Word, arriving at the actio of lectio divina. Changes are being given to a more evangelical attitude. 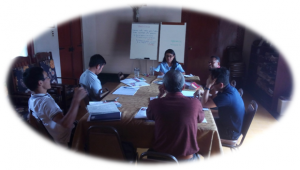 - We try to make every subject of the program very well, we do not work with academic qualifications, but we seek to bring them to an experiential experience. In cultural immersion, you learn the Spanish language at the basic, intermediate and advanced levels, inserted in a local community or apostolic work. 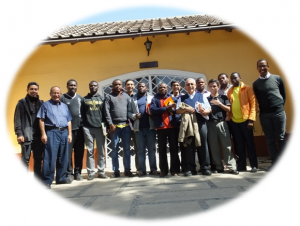 At this stage, we have the help of teachers who have the specialty of communication. Speaking Spanish in all circumstances unifies us! Let's move from Babel to Pentecost! We have participated in some inter-congregational experiences. In the month's retreat, we selected the 112 themes to reflect on during the 4 weeks. In the “time of deepening” discipleship, formation continues giving existential meaning to the MSA own themes about charisma, mission, spirituality, identity and lifestyle. 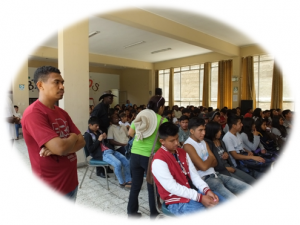 In the different stages, the probes share with brothers of other cultures in a community of life. In cultural immersion, they share the apostolates of the local community. In the month retreat, personal and community prayers are prayed for. In the time of deepening, the scope of humanization and evangelization is studied, as well as the pastoral implications of promoting, forming and accompanying, having as Sunday practices the dialogue with the culture in five neighboring parishes and the two MSA works. In the time of apostolate, we prioritize vocational experiences and “vocationalization” in all pastoral areas, in order to achieve the habit of being a missionary in vocations. 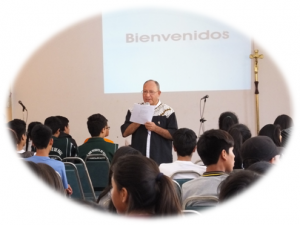 - The art of accompaniment is exercised through personal encounters and we add the construction of the personal life project (the PPV, which contains all the dimensions of training with its goals). As artisans to accompany integrally in the vocational discernment, the formators distribute according to the number of probationers fairly. Informal dialogues, formal interviews and PPV in the itinerary and gradual process of formation help us to prepare the final report.

8. The Internet and the use of personal electronic equipment.

- We practice the mature use of the internet as a useful medium. The values ​​we form in this field are prudence and responsibility. We have candidates from those who lack electronics to those who have a good equipment of their own (cell phones, laptops or tablets). The internet in cultural immersion time is used for interactive language learning. A week before starting the month retreat, we explain the reasons for this phase of abstinence from cyberspace, and contacts are advised so that during this time we pray for each other. At the time of deepening, we began a virtual fasting experience from 8:30 pm until the following day, which was not possible to maintain for contextual reasons. In the time of the apostolate, we will take into account the MSA policies of June 2017 on the apostolate Internet. Disconnecting is a challenge for our candidates -- when there is distraction, evasion to fraternal life in community, and being an obstacle to a healthy training environment, we continue in the art of accompaniment.

II. ANALYSIS OF THE SITUATION

Continue their training in Colombia.

Let us continue with the ITP's grace filled experience, living in intercultural MSA communities, with festive Africa with joyous dance and music, spiritual Asia and inter-religious and hospitable America, following the charism of forming priestly vocations for an intercultural Church.